As states begin to open and the demand to test and screen for COVID-19 grows, researchers are enlisting all the help they can get — including dogs.

Led by Cynthia M. Otto, director of the Working Dog Center at UPenn’s School of Veterinary Medicine, eight Labrador Retrievers are being trained to sniff out the coronavirus.

Training dogs to sniff out disease is far from new. In fact, Otto says this new project builds off of programs UPENN already has. “We’ve been working with medical detection dogs since 2013. We have a program where we’re evaluating whether dogs can help us in the early detection of ovarian cancer, we’ve looked at diabetes alert, and we also have a project looking at bacterial infections and the ability for dogs to help us to make those diagnoses. We feel that we’re really well-positioned to take this and apply it to the next new and important disease, and that’s certainly COVID-19.”

Such a big undertaking can’t be done alone. Otto and the University of Pennsylvania Working Dog Center have partnered with other organizations to bring in the best scientists both from the university and other programs, including Auburn University and Medical Detection Dogs UK.

How Long Does Detection Training Take?

So how do you train a dog to detect COVID-19? It’s not easy. “There are many, many steps,” Otto says. “Our first step is to ask the question: Is there a unique odor associated with COVID-19 infection?”

That first step is critical. If there is no odor associated with the virus, there would be no point in going any further with training the dogs. So Otto and her team are beginning by working with physicians to collect samples from patients who have been tested for COVID-19 — both positive and negative.

“We’re taking the samples from positive patients, showing them to the dog, letting them sniff them, and then reward them for sniffing those samples,” Otto says. “So we let them know there’s something in there that is a good thing.”

The dogs then sniff the negative samples, but don’t get a reward. “They learn to discriminate that there’s something unique about the samples from the COVID-19 patients,” Otto says.

Sound familiar? This sort of training is similar to that done in Scent Work, Otto says. It’s also the same process used to teach dogs the odors of explosives or narcotics. But there’s an added challenge in medical detection. Dogs must be able to not just find the odor, but to discriminate between whether the odor is in the sample or not in the sample. 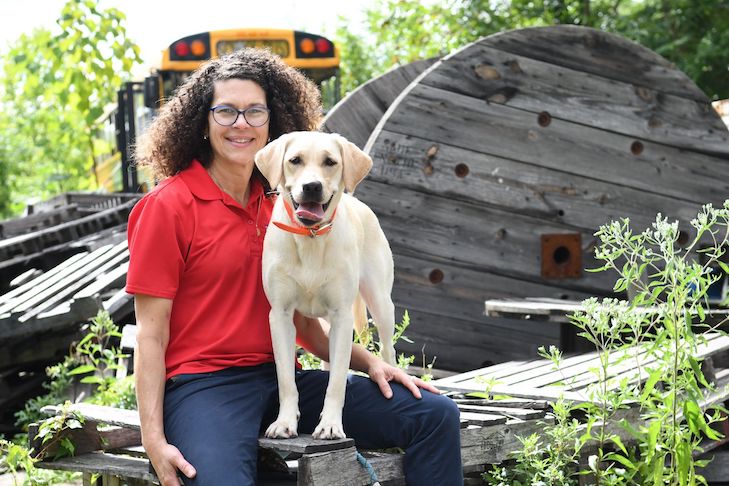 Taking it to the Real World

If that all works, Otto says they can start thinking about taking this into operational usage. Otto and her team have to determine how best to take these dogs into the community and places such as the airport to evaluate how they could help detect individuals who might be positive in a real-world scenario. “Especially those who aren’t showing symptoms because those are the ones we really need to identify,” Otto says.

Right now, the dogs are being trained with practice scents, until the physicians that Otto is working with are able to send over COVID-19 samples. Otto estimates this will be within the next week or two. After three to four weeks of exposing the dogs to those samples, the researchers should be able to determine whether or not there is a scent associated with the virus.

Training in the lab includes teaching dogs the process. Otto’s lab uses a scent wheel isolated from other stimuli or odors. The dogs learn to go into the room by themselves, sniff each container, then either stop and indicate the scent is present or not present.

And what breeds are best suited to sniff out COVID-19? Labrador Retrievers were chosen for a reason. “First, we know these Labradors have been selected for generations for their olfactory performance and hunting,” Otto says. “We know they have the genetic potential and we are selecting them based on their behavioral aspects that we think will be successful.”

There’s a second reason this breed was selected. Taking these dogs out into the operational setting means choosing a dog that the majority of possible users would be most comfortable with. “When we talked to people that might be potential end-users, they felt more comfortable bringing Labradors into a big public setting rather than German Shepherd Dogs or Belgian Malinois, which many people might be afraid of,” Otto says. “So it’s that calming effect that a Labrador brings as well as the effectiveness.” Many breeds, however, are equipped.

When it comes to safety, Otto and her team have already thought ahead. Even though the risk to dogs is very small, they are still training the dogs to detect odors at a distance, which protects both the person being screened and the handler as well. The dogs will also be monitored and tested for antibodies throughout. Some of the center’s partners include the Army Chem Bio-Center and other agencies who are looking at the best decontamination procedures.

“I think the other piece that’s really interesting is that if we’re using the dogs to screen rather than taking a swab of a person, no one has to take their mask off,” Otto says. If a healthcare worker sticks a swab up someone’s nose, they may end up coughing or sneezing with their mask pulled down. With a dog, everyone keeps their mask on and there is nothing to stimulate a person to sneeze or cough. The handlers of the dogs will be even further away from those being tested, at the end of a six-foot leash in full protective equipment. 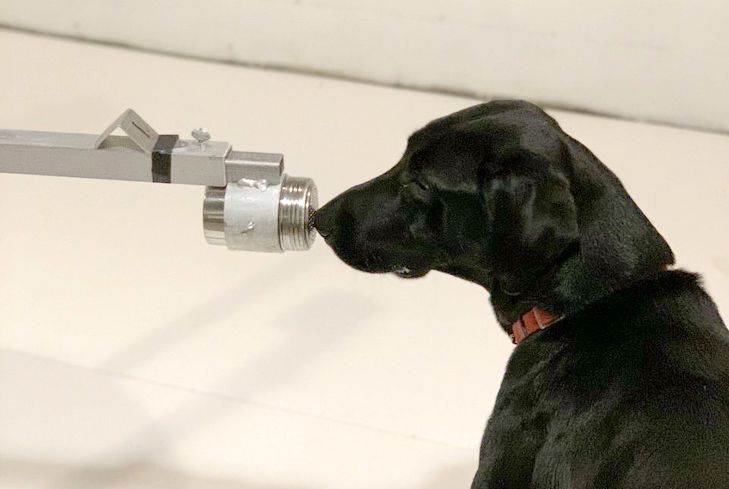 If all training goes successfully, the biggest issue becomes demand. There is already a huge shortage of detection dogs in the United States for explosives work. There’s also a shortage of testing and screening. Pair those together, and almost everyone will want a COVID-19 detection dog. Whether it’s to screen at a company or screen before entering a restaurant, Otto anticipates there won’t be enough trained dogs to keep up with the demand.

The question becomes: are there enough dogs to do this? And if there are, are the dogs performing both accurately and safely?

“I think people are very excited and I think a lot of individuals would love to train their dogs to help in this mission, but we have to make sure it’s safe for the people, it’s safe for the dog, and that they’re performing in a way that we can rely on the information they’re giving us,” Otto says. If a dog is inaccurate and dismisses someone as not infected when they really are infected, it becomes worse than not knowing in the first place. If a dog indicates someone is fine, that person may act with fewer precautions.

The goal is for these dogs to streamline regular testing. So these dogs can help identify the people who should be prioritized for testing. “We know the dogs are very sensitive and very accurate but we want to make sure we’re confirming that and that we have the most information possible.”

While there is still a long journey ahead for Otto and the eight Labrador Retrievers being trained to sniff out COVID-19, Otto is optimistic about the potential of her research. A dog’s nose is a powerful tool, Otto says. There have been many attempts to create electric noses, but nothing comes close to the ability of dogs.

The AKC is here to help dog owners adapt to the ongoing COVID-19 pandemic. Find answers to all your coronavirus concerns, plus at-home activity ideas, training tips, educational resources, and more at our ‘Coping With Coronavirus COVID-19′ hub.